Once again, National Fire Fighting Manufacturing FZCO (NAFFCO) was awarded on November 13, 2013 the prestigious Mohammed Bin Rashid Al Maktoum Business Award 2013 for manufacturing excellence. It can be recalled that NAFFCO has won previously securing the award in the exports and manufacturing categories in 2005, 2006 and 2010.

In 2010, out of 122 UAE-based participating companies, NAFFCO was awarded Best Business Performance in Manufacturing for the Free Zones category. Unlike its previous cycles, the award this time has expanded its scope to include UAE profit-based and non-governmental companies. NAFFCO has proven that its business performance is the best among the best.

In 2006, having gained experience through self-analysis of its high business performance, NAFFCO bagged the Mohammed bin Rashid Al Maktoum Award, this time in Manufacturing Category for Free Zone companies.

NAFFCO is one of the first winners of Mohammed bin Rashid Al Maktoum Award since its inception in 2005 garnering the recognition of business high performance in the Export Category for JAFZA companies. The first MRM award in 2005 has motivated NAFFCO to surpass international standards and achieve business excellence. 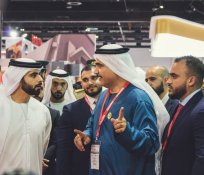